How Should I Teach Sight Words? 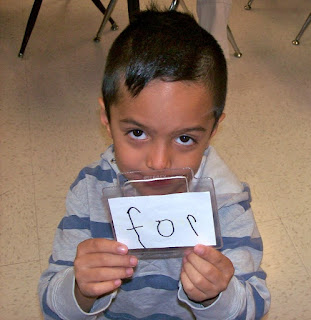 I used to tell the parents of my students that sight words were words that could not be sounded out. When my students would start sounding out a sight word, I would stop them and tell them they couldn't read it that way.  I taught these words as basically whole words…the spelling just needed to be memorized.  I have since learned that teaching these words as primarily whole units to be memorized visually, inhibits the way the brain actually stores and learns these words. It’s actually critical that students match the individual sounds of the word with their visual representations. This process is known as orthographic mapping.  Any time we draw a student’s attention to only the spelling of the word, in a rote memorization fashion, we are inhibiting the orthographic mapping process. In other words, they need to sound it out…even when the spelling is not phonetically regular. 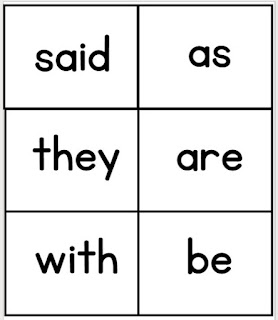 Because of this I have completely changed the way I approach sight words. I’d like to share my current plan for teaching these tricky words.  I’m still perfecting the process and tweaking things to get the best results. Feel free to chime in with your own suggestions.  This part of my routine I learned from the EBLI training I received this fall. I’m really grateful for this training…I had read about orthographic mapping last spring in David Kilpatrick’s books…but when I saw the way EBLI taught sight words (and all words), it really hit me! This is facilitating orthographic mapping!

The first thing I want to make sure I do is have my students pay attention to the sounds in the word.  So I don’t show them the word first. I SAY the word.

“Today we’ll be learning the word: said.  Listen: said (say it slow). How many sounds do you hear in the word said?”

“Good. I’m going to say the sounds again while I write the sound lines.” 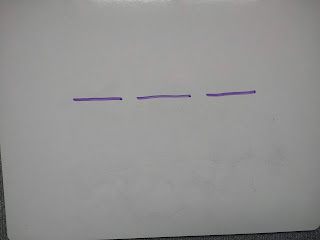 “Now I want you to say the sounds while you write the sound lines on your white board.”

Then students once again segment the sounds while drawing a line for each sound on their individual boards.

Now I show them the spelling of the word. -Note that I haven’t shown them the visual word up until this point. Sometimes I like to get a little dramatic as I unveil the word.  -Especially for really irregular ones…my students died laughing when I revealed the spelling for “of” and showed the shock and craziness of the word with my expressions.

The students reply with “s” and I say and write /s/ on my first sound line. 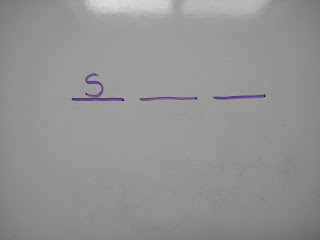 “Now I want you to say /s/ as you write it on the first sound line.” Students write the letter s while saying the sound it makes.

Then I ask, “Which letters do you think spell the /e/ sound?”

I write “ai” on the second sound line while saying /e/. I have students say as they write the /e/ spelling. 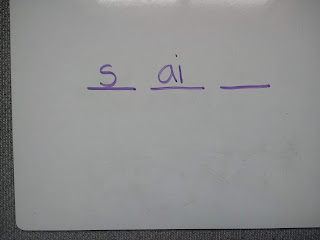 Finally I ask students which letter spells the /d/ spelling and we say and write the d on the third sound line. 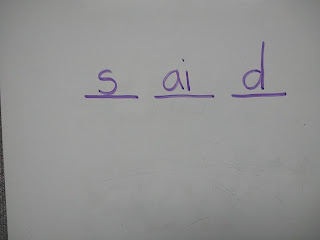 We take some time to reflect on the spellings and note any unusual ones.  In this case, only the /e/ spelling is tricky.  I have the students circle the “ai” on the second sound line and have them put two lines underneath it (because two letters spell that sound). 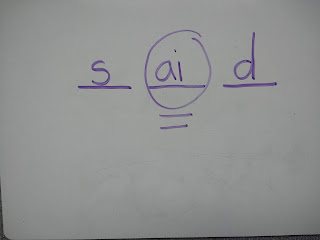 Next, we use our fingers to erase the letters, but leave the lines and circles. 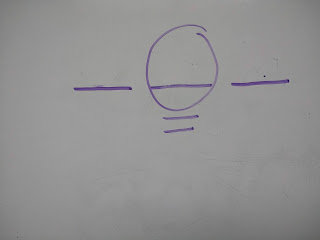 I cover up my “said” card and have the students try to write the word from memory. 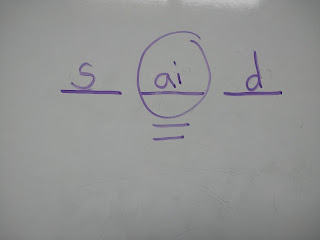 Lastly, we erase everything (letters, lines, circles) and write the word again with no visual cues. 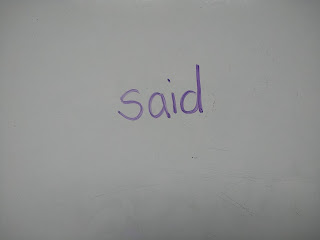 If we come across a sight word in a text we are reading and they don't know the word...I don't just tell them the word.  Instead, I have them sound it out...and when we come to the tricky part, I will tell them the sound.  For example, if they came across "said",  I would simply say, "In this word, the ai is going to say /e/."  Then I'd have them sound it out, making sure they say /e/ for ai.

For a lot of students, this process is enough for them to learn these words.  But for others, I need to go into the sight word method I learned in my Orton-Gillingham Training.  More on that coming…

*Update: Check it out this link for info on training from EBLI on this process: https://scienceofreadinginfo.com/ebli-workshops.html?fbclid=IwAR2UsRYSBC5wCIXq_dKRPkE7_AqZfgAcOWrESh31--WB1D_HoUPhjnPzcAg

Popular posts from this blog

The 7 Deadly Errors of Teaching Reading

May 10, 2020
There’s a wrong way to teach reading and, unfortunately, it’s also the most popular way.   So, if you’ve ever committed these teaching errors, don’t worry, you’re not alone.   I’ve been there, too.   I was shocked when I realized that many teacher prep courses and even professional development classes are teaching reading methods not supported by science.   If you’re reading this blog and find yourself surprised or even defensive at these “errors,” please take a moment to step back, take a deep breath, and use it as a springboard to start your journey into learning more about the science of reading.   Instead of feeling denial, guilt, or anger…I encourage you to simply learn more and do better. Deadly Error #1:   3-Cueing Strategies (aka the Beanie Baby Reading Strategies)               I know they’re cute and cuddly. I know everyone uses them. I know you’ve scoured dozens of thrift stores to finally complete your set.   But there is actually no research to support these “B
15 comments
Read more

Sink or Swim: The Appearance of Reading

January 20, 2019
When my two oldest boys were in swimming lessons, I remember watching them, amused, as they'd literally walk back and forth between the width of the pool while making big swim strokes with their arms.  I'd see other kids in the class actually swimming...but my boys? They were walking.  They were going through the motions of swimming, without actually swimming. This is often what we see in classrooms today.  Students appear to be reading...some even become quite expert at keeping up the appearance.  Their arms are doing their strokes perfectly...but if you look under the water?  They're only walking.   Let me explain. I had a student one year who severely struggled in school.   By the end of her kindergarten year, she only knew a handful of letters.  I remember placing a book in front of her as I administered our state-mandated end-of-year kindergarten test.  She vaguely looked at the words on the page and then studied the picture.  She looked back down and found th
18 comments
Read more

Phonemic Awareness: Where Do I Start?